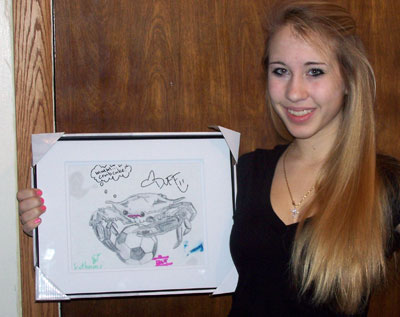 Nicole Manzo shows off her autographed sketch that was the inspiration and blueprint of the Charm City Cake that was displayed and eaten at the TourneyCentral booth at the 2011 NSCAA Convention in Baltimore. 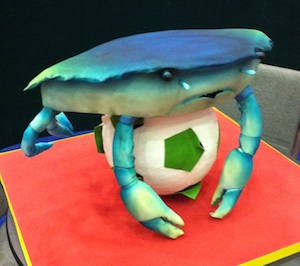 The 2011 NSCAA Convention is being held in Baltimore. Naturally, we had to get a Charm City Cakes, Ace of Cakes cake. Just had to! But what was it going to look like?

Back in June when we were planning the booth, we had all sorts of ideas. The one that finally emerged was a Maryland blue crab tearing at a soccer ball. The big problem was nobody here at TourneyCentral could draw.

“No problem,” I thought. “I’ll just go to a toy store, find a soccer ball and a toy crab, put them together, shoot that and send it over to the cake folks.” Only in Ohio, Maryland blue crabs are hard to find. Any crab was hard to find. I was just about to give up when I tweeted:

Can anyone draw a Maryland blue crab attacking a soccer ball like a monster truck?

A few days later, I got an email with a sketch attached from Nicole Manzo. Nichole is a talented artist who loves being creative but was apprehensive about studying art. Art doesn’t pay the bills; business skills do.

But the world could not lose one more artist to “practical thinking” and her sketch was going to be my cake. I sent it over to Duff’s crew and they pounced on it, confident they could make an awesome cake from that.

And they did. And they not only made an awesome cake, they each signed Nicole’s sketch which we are going to frame and present to her when we get back home to Dayton.

And this is Nicole’s sketch Katherine and Ben used to build her cake. The Charm City Cakes crew is just awesome for doing this for us. We’re fans forever! (My favorite edit is the lipstick on the crab. Awesome!) 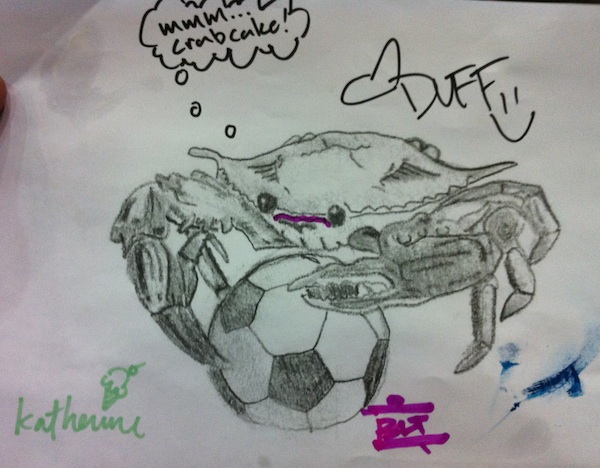 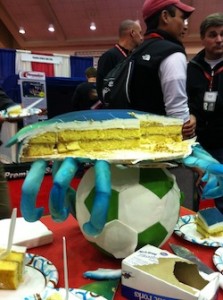 And just because Mary Alice’s voice was in my head, saying “It’s cake. Eat the cake.” and I didn’t get a piece the last time we got a Charm City Cake, we sliced into the cake at about 8:00pm and started serving pieces to hungry soccer coaches who stopped by the booth.

There may be some left, so if you are hungry, booth 1527. Remember, cake at 8:00pm is dessert, but at 8:00am, it is pastry. Yellow cake, chocolate butter cream filling. Awesomely delicious crab cake.

UPDATED
The Fairmont High School Newspaper published the story about Nicole. You can read it here.

“Can anyone draw a Maryland blue crab attacking a soccer ball like a monster truck?” That tweet from TourneyCentral.com President Gerard McLean moved 16-year-old Nicole Manzo, a junior at Fairmont High School, to try her hand at designing a cake. McLean forwarded the design to Charm City Cakes, the star of the popular television show, “Ace of Cakes,” on the Food Network.

TourneyCentral.com is using the resulting masterpiece cake to promote their complete end-to-end soccer tournament management system at the upcoming National Soccer Coaches Association of America (NSCAA) Convention in Baltimore, Maryland on January 13-15, 2011. The annual event is a showplace of soccer education, awards and exhibits for soccer coaches and youth tournament organizers nationwide.

The request actually got to Nicole secondhand through her mother Karen Manzo, who is a business associate of McLean’s. According to Karen, Nicole is an “Awesome artist,” whose first job was as a face painter at the Italian Fest. She continues to volunteer for that event and others as time permits. In addition to artistic pursuits, Nicole is a dedicated business student who is, “determined to own her own business some day.” On the extra-curricular front, the younger Manzo is a three-sport athlete spending time competing in field hockey, swimming and track.

ABOUT TOURNEYCENTRAL
TourneyCentral is the only fully integrated, event-focused online solution for youth soccer tournaments. Since 1999, TourneyCentral has been producing web sites that provide youth soccer tournaments with end-to-end integrated experience management for guest teams, from marketing through scoring. In addition, advertising tools provide tournaments with an increased opportunity for advertising and sponsorship revenue as a result of significantly increased traffic to the web site. TourneyCentral will be attending the NSCAA Conference in Baltimore in January 2011. For more information, visit www.tourneycentral.com.