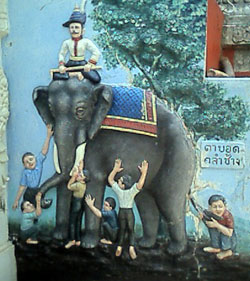 There is an old joke about five blind men describing an elephant. The one who feels the tusks insist that an elephant is made up of hard stone, shaped to a pointy end. The man feeling the ears swears an elephant is a huge tarp. And so on, each forming his own opinion on what an elephant is based on his own personal experience. Of course, any seeing person would recognize the elephant is the sum total of all of these observations, even though each’s observations are entirely accurate.

This is what a soccer tournament is like sometimes. The referee assignor may be entirely focused on getting referees assigned that he forgets the game scheduler has coaches with special scheduling needs. The game scheduler may forget that the field coordinator has to work with restrictions on field use imposed by the parks department. The ad sales person may forget that the tournament director has profit considerations and can’t pay for the extra three field banners, and so on.

Gone are the days when a few coaches could get some teams together and play some games over the weekend and call it a tournament. The modern soccer tournament is less about soccer and more about building an event around soccer. It must be efficient, comprehensive, competitive and collaborative, both with the soccer community and the community at large.

Here at TourneyCentral, we think that is a very good thing. It shows that soccer is evolving into the mainstream of American culture.

Our Advice: A successful soccer tournament is a complicated organization with a lot of moving parts, many of which appear to be in conflict with each other. It needs a general manager (tournament director) who has the skills to motivate each “department” to excellence, but also keep the overall goal in mind and on track.

When the referee assignor, the college coach coordinator or the game scheduler is enabled to drive the mission of the tournament, s/he will most likely do so to the detriment of the other departments. We have seen tournaments go bust in the span of a year simply because the focus shifted to accommodate one person’s myopic vision.

Don’t be that kind of event. The teams come to your tournament with an overall expectation of excellence in ALL areas, from a website that is easy and quick to use to frictionless hotel accommodations to great scheduling and easy access to the fields. Your community expects your soccer tournament to reflect positively on it and produce guest teams that have a good experience visiting, win or lose.

In the end, your teams should never see the individual “departments” that make up your tournament.