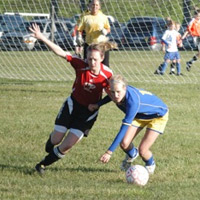 FAIRFIELD – This weekend, the Mid-American Soccer Classic (MASC) will host 262 boys teams from seven states, including Canada. The teams are traveling from Indiana, Ohio (North and South), West Virginia, Michigan, Kentucky, Illinois and Pennsylvania. Six of the boys teams are from Canada, with twenty-one teams total from Canada. A total of 430 games over Saturday and Sunday will be played at Optimist Park, Joyce Park and Applecreek Fields in Fairfield. The girls play at the same venues next weekend, April 12-13.

Some teams had expressed some concern about the weather, but according to Mike Hessling, the tournament schedule coordinator, the fields are in playable condition and he expects the rain to hold. “We’ll just move things around if we need to,” Hessling chimed. “No big deal.”

The total number of teams for both weekends is 577 with a grand total of 950 games. “That’s also a lot of referees,” says John Kingham, one of the three referee assignors tasked with finding and scheduling referees. “We just take it in stride, the weather and all the activity. That’s just soccer.”

For all the game action as it unfolds throughout both weekends, visit the MASC Web site at www.masctournament.com. 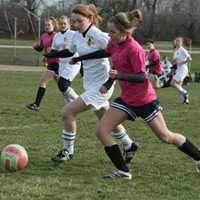 MIDDLETOWN – According to its Web site, the 2008 Middletown Spring Blast declared the following teams champions within their divisions.

For all the game scores, standings and fan-contributed photos, check out the Web site at www.middletownspringblast.com. 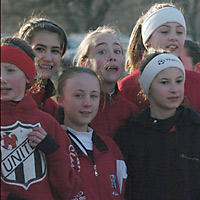 MIDDLETOWN – Whistles echoed sharply through the chilly air from all four corners of Smith Park at 8:00am this morning, signaling the start of the eleventh annual Middletown Spring Blast. Teams from across the Midwest converged at the Spring Blast to compete for a champion trophy. Among the hopeful teams is the girls U12 North United Blitz from Pittsburgh, Pa.

“Ohio is known for good soccer tournaments,” said Ryanne Palermo, head coach of the Blitz. This year is Palermo’s first time bringing her team to the Spring Blast, and she has high expectations. “The Spring Blast came highly recommended by other teams in our club that have played here in previous years.”

The North United Blitz is one of eleven teams from the North United Classic Soccer Club. In all, 199 teams from six states are competing for thirty champion and finalist trophies in age-based divisions, ranging from U8 through U19. Fourteen teams are from Pennsylvania.

“We’re the first tournament that a lot of teams attend to kick off their spring season,” says Kathy Stites, tournament director for the Spring Blast. “We make sure they all have a good time, go home and tell all their club teams about our tournament.”

The 2008 Middletown Spring Blast is held Sat-Sun, March 29-30, with games from 8:00am to 5:00pm. Championship games are held on Sunday starting at 1:00pm. To follow the North United Blitz and all the teams with real-time scores and photos contributed by fans, tune into www.middletownspringblast.com.

PHOTO: Members of the North United Blitz rally before their first game on Sat. The Blitz plays at 9:15am and 2:15pm on Sat and again at 8:00am on Sun. 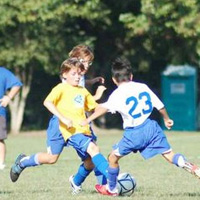 DAYTON – Despite the credit crunch, foreclosure rate and unemployment news, soccer tournaments appear to be doing just fine. According to TourneyCentral, applications for spring tournaments are up an average of thirty-seven percent over this time last year.

“With the increasing price of gas, we were expecting a down year,” says McLean. “We are still cautiously optimistic about concessions sales at the actual event per capita, however,” adds McLean.

According to Carol Maas, tournament director for the Warrior Classic held during Memorial Day weekend in Dayton, people are looking for a quality entertainment and competition value. The Warrior Classic is in its twenty-second year and is up about forty-two percent in applications over this time last year.

“I know I’ll have to turn away teams because we simply don’t have enough fields,” Maas added. “That is the hardest part of being successful.” Maas typically attracts close to 500 teams into the Miami Valley, with an economic impact of over $5 million.

The official kick-off of league soccer season in the Miami Valley is Sat, March 15. The tournament season follows soon after the next weekend with the Middletown Spring Blast. For more information on soccer tournaments in the Miami Valley, visit www.tourneycentral.com/events.html. 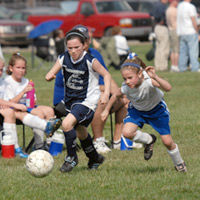 MIDDLETOWN – After almost a foot of snow, rain, cold and what seems to be a very long winter, Middletown is ready for a spring blast; the Middletown Spring Blast soccer tournament. The Spring Blast has become the traditional sign of spring for the soccer community in the Miami Valley and this year’s weather news is causing some anxiety among the guest teams.

“We’re wet, but not flooded,” Kathy Stites, tournament director, writes back to one of her guest teams who is concerned about the effects of the recent rapid melting of snow, followed by rain.

The Middletown Spring Blast will be held at Smith Park and Franklin Park this year. An estimated 7,200 attendees from 199 teams will all be in town over the weekend of March 29-30, generating an estimated $1.8million economic impact for the City of Middletown and southern Dayton.

“Easter and spring break came at us this year,” Stites added. “We’re a little down in numbers from last year, but not by much.” Stites added that the Spring Blast has become an annual tradition for a lot of teams.

The Spring Blast attracted teams from six states this year – Ohio, Michigan, Pennsylvania, Indiana, Kentucky and West Virginia – to fill its roster of 330 games. Teams from under 8 through under 9 in both boys and girls will be competing for trophies in thirty divisions.

For more information about the Middletown Spring Blast, including real-time scores, standings and fan-contributed photos as the game progress thoughout the weekend, visit the web site at www.middletownspringblast.com.

PHOTO: (contributed) Players from the Lady Skyhawks 97 and Hurricanes compete for possession of the ball during last year’s Blast.