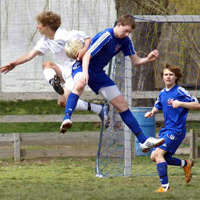 FAIRFIELD – Armed with cameras trained at soccer players on the field of competition, Corinne Vespie and her crew of soccer moms and dads are on a mission to capture as many photos as possible of the teams at this year’s Mid American Soccer Classic (MASC).

“I’ve had over twenty responses from boys teams and over forty responses for girls teams to be photographed,” states Vespie excitedly. “I’m sure we’ll get more as the tournament progresses.” All the proceeds from the sale of the photos will be given to the Fairfield Optimist Soccer Club (FOSC) Girls U16 Thunder.

Joining Vespie in the fund-raising endeavor are other soccer moms and dads that she recruited; Lorinda Ottaway, Vickie Gump and Shawn Starkey. Vespie is a part-time professional photographer and hopes to turn this opportunity into a full-time profession.

“All of the photographers have girls who play for FOSC,” Vespie explains. The photos will be available through Picture Perfect Studio’s Web site, linked from the MASC tournament Web site.

For complete information about the 2008 MASC soccer tournament, including real-time scores, standing and photos taken by Vespie and her crew, visit www.masctournament.com.

PHOTO (Contributed by Corinne Vespie) A game photograph available for purchase of the MASC boys weekend.